Why it's better to take fish oil capsules at dinner

Why it's better to take fish oil capsules at dinner

If you're taking fish oil capsules, take those things with the biggest meal of the day. Or at least with a meal that also contains a relatively large amount of fat. As a result, your body will better absorb the fatty acids in your supplement. 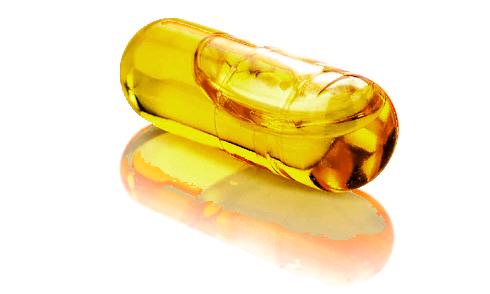 Study
In the 1980s, researchers at Murdock Pharmaceuticals published a human study in which they gave 8 adult men capsules containing a total of 5 grams of polyunsaturated fatty acids on multiple occasions. These capsules contained 1 gram of EPA and 650 milligrams of DHA.

Results
After the meals, the researchers measured how much fish fatty acids appeared in the bloodstream. The percentages you see in the table below are calculated based on the concentration of linolenic acid, which is by definition 100 percent.

As you can see, the absorption of the fish fatty acids increases by 30 percent with a high-fat meal in regular fish oil capsules. The uptake of ethyl esters increases by a factor of 3.