First discovered in 1967, Tren was originally created for veterinary use, being injected into cattle approximately six weeks before slaughter. The enhanced ability of Trenbolone to synthesize protein allowed the animals to pack on muscle and bulk very rapidly. However, the possibilities that it offered for humans were also identified and the drug was marketed by Roussel AG from Germany until the 1980s. At that time, two out of the three possible variants of the drug were removed from the human market, with the third one following suit around a decade or so later. The FDA never gave it formal approval for use on humans. Although it is a derivative of Nandrolone, it is a unique compound because it is available in three different esters. These are: Trenbolone Acetate, Trenbolone Enanthate, and Trenbolone Hexhydrobenzylcarbonate

The latter is most commonly known as Parabolan and although it remains a variant of Tren, is often regarded as a separate entity.

The dose for Tri-Trenbolone is between 150mg and 300mg per week. Some men take up to 450mg per week, but you should start with a lower dose and see how your body responds to it. Remember, the higher the dose, the higher the risk of side effects. Tri-Trenbolone is a very powerful steroid so a low dose does go a long way! The recommended cycle time is from 8 to 12 weeks. Tren is generally an injectable although oral liquid versions have been rarely available.

HOW IS THIS PRODUCT USED?
Trenbolone is a member of the strongest group of anabolic steroids so the potential gains are many and varied. Bodybuilders and other athletes will see a number of different benefits after taking this steroid, both in their performance and with their overall appearance and muscle definition. The steroid increases the red blood cell count, which in turn helps to bolster performance by delivering greater amounts of oxygen to the body. It also has a direct impact on fat burning while simultaneously helping to build body mass and enhance muscle growth. It achieves this via superior nitrogen retention and also improved protein synthesis. Cellular repair can be up to 10 times higher when Trenbolone is being taken, another way in which the steroid can help to boost the rate of growth.

POSITIVE AND NEGATIVE SIDE EFFECTS
The half-life of this steroid is slightly more complex than some other types of anabolic steroids because it is available with three different esters. The base hormone has a half-life of approximately 6-8 hours but this is largely irrelevant as an ester is attached before being taken. The type of ester attached to the drug will determine the length of the half-life. Bodybuilders and other athletes will see a number of different benefits after taking this steroid, both in their performance and with their overall appearance and muscle definition.. As long as you can stick to the suggestions and directions associated with this steroid, you really shouldn’t have any problems of note. In addition all side effects are reversible once injections stop and with a proper post-cycle therapy plan. It is highly recommended that to reduce or eliminate any androgenic side effects one should either use an AAS (Anti-estrogen) during the cycle such as HCG and Arimidex or Nolvadex. One can also reduce androgenic effects by using proviron or masteron during the cycle. Masteron and proviron can actually increase the absorption of free flowing testosterone in the body while also giving the body a hard chiseled look. Post therapy should always include Clomid as an AAS.

Positive Side Effects
Amazing muscle gains
Relatively low water retention
Improved fat burning
It can repair cells up to ten times more
It has no estrogenic effect
Negative Side Effects
It lowers HDL, while raising LDL Cholesterol
Oily skin
Increased risk of enlarged prostate
Increased chance of temporary hair loss
Aggressive behaviours
Shut down natural testosterone production while on a cycle and a PCT is recommended. 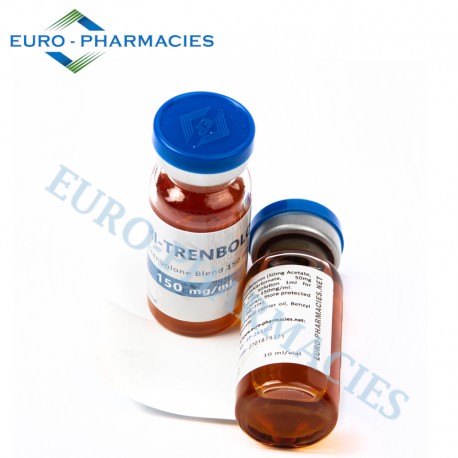 Get on it boys as supplies last. The sust of tren right here..

I've used this product over 4 times (CYCLES) in my life. It's my go to Tren brand and when it kicks in watch out. Keep your cool