Give a guy who weighs 80 kg a dose of 8 g L-ornithine HCl before a weight training session, and his growth hormone level will increase by a factor of three. Japanese researchers working for ornithine manufacturer Kyowa Hakko Bio have studied the effects of this amino acid on athletes. 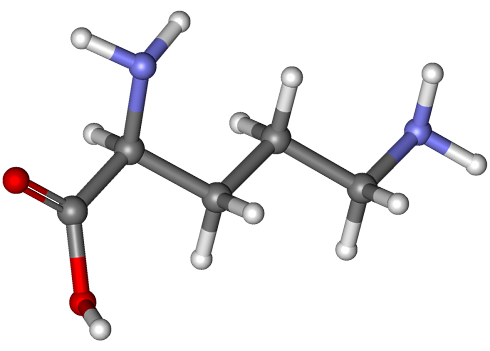 Ornithine
It's not the first time we've written about publications by these researchers. According to their research, endurance athletes can improve their final sprint by taking ornithine, and ornithine also removes ammonia from the bloodstream during physical exertion.

The idea that ornithine supplements can boost the production of growth hormone after heavy training is not new, but it is controversial.

We call this conflicting evidence.

Study
The Japanese gave ten young men, average age 22, 100 mg L-ornithine per kg bodyweight and then got them to do 8 sets of biceps exercises. The protocol is shown above.

On another occasion the men trained after being given a placebo.

The men were not used to strength training. The researchers suspect that experienced strength athletes would react less well to the supplementation. They base this on a study done by American researchers in 1990 [Int J Sport Nutr. 1992 Sep;2(3):287-91.] in which bodybuilders were given 40, 100 or 170 mg L-ornithine per kg bodyweight.

Only the highest dose led to a rise in the growth hormone level.

Conclusion
If you want to boost growth-hormone levels with arginine or ornithine, then you apparently need hefty doses. The effective dose is even higher for experienced strength athletes, the Japanese suspect. Strength athletes' hormone balance is already so stimulated by their training, that only a very strong stimulus will boost growth hormone levels further.

If this reasoning holds, a bodybuilder weighing 80 kg would therefore need not 8 g ornithine but almost 14 grams.