This fight is brought to you by Gorilla Pharma: When you've monkeyed around with the rest try the best GORILLA PHARMA

In the blue corner weighing in at 231 pound yielding from New York City with an unknown professional record but sporting the tightest fucking DA haircut I've ever seen........ARNOLD

In the red corner weighing in at 236 pounds yielding from South Jersey with an unknown record but has a tight ass of a 15 year old......JERSEYDEVIL

Jersey, Arnold please come to the middle of the ring. I want a good clean fight there will be no hair pulling or biting or spitting unless I'm not looking.
Go back to your corners and come out fighting.

Round1 Ding Ding
Jersey comes out with a fire in his eye looks like he's ready to tango but wait what's this Arnold is leaning on the ropes talking to some hot chick in the first row.
Arnold straightens up and Jersey lands a stiff jab dead center. Arnold comes back with a combo from hell but it looks like it didn't even stun Jersey.
They both start dancing around and Custom tells them stop stalling or he's going to take a point from each side.
Arnold asks for time out in front of Jerseydevil cause he dropped his mouth guard but while picking it up he gives Jersey a shot right in the nuts.
There was no foul cause Custom didn't see it he was getting a sip of water.
Jersey all fired up lands a round house to the kidneys and Arnold wets his pants.
Arnold come back with a thumb in the eye and Jersey gets all teary eyed
Ding, Ding end of Round1

Lol...your on a roll lately

Sent from my 6062W using Tapatalk

Arnold comes to the middle of the ring but Jersey hasn't left the corner yet he's seems to be talking to a police officer and point at some guy in the second row wearing an I love Dispence Quick shirt don't know what thats all about. Now Arnold is standing in the center of the ring with both hands in the air standing one of foot, its like something out of the Karate Kid.

Jersey extends his arm for a touch of the glove but instead hits Arnold with an uppercut that throws him right out of the ring.

Arnold come back in the ring with a fold up chair and give Jersey a tally wacker right to the left temple.

And good Lord what's this, a butt naked little boy wearing a cape has jumped into the ring and is running around in circles with 2 dragons in his hands. Wait that's not a little boy that's a grown man and the cape says Mighty Mouse. Folks if you have children watching this fight now is the time to look away.

Custom clears the ring, slaps both fighters and tells them "now lets get busy"

Both fighters exchange blows and it seems Arnold is bleeding from the corner of his mouth
Check that it's just ketchup.

Ding ding end of Round2

I would punch that bitch in the mouth so hard and knock out his dentures. I'm older then him, but rumor has it his ex got pissed and knocked his teeth out with a baseball bat. (Go Phillies)!

Both fighters approach the center of the ring but for some reason Arnold has his glove stuffed in his shorts.
Wait,wait I know what he's doing it's the old stink finger trick he wants to pull on Jersey

Jersey sees it and the 89 year old takes down Arnold with a firemans carry then sits on his face and farts in his mouth.
It must have been a double whey shake for Jersey before the fight cause Arnold is now puking all over the ring

Jersey gets up but slips on the braf and is now holding his back rolling around in pain. He's trying to reach for his Life Alert alarm but his gloves are stopping him from activating it.
Custom looks to be leaving the ring in search of a mop and some mouthwash for Arnold
No,no it's over, it's over Custom has disqualified both fighter for conduct unbecoming as an ASF member

REHH said:
Lol...your on a roll lately
Click to expand...

Sent from my LG-H871 using Tapatalk

My old lady used to be a ring girl for boxing matches. True story. I got Arnold in the fourth by KO. Carry on

Just like any boxing match , JD wins but Arnold will get the W

Im glad I came back to the forums just so I can read Customs plays.

Sent from my ONEPLUS A6013 using Tapatalk

GUNRACK said:
My old lady used to be a ring girl for boxing matches. True story. I got Arnold in the fourth by KO. Carry on
Click to expand... 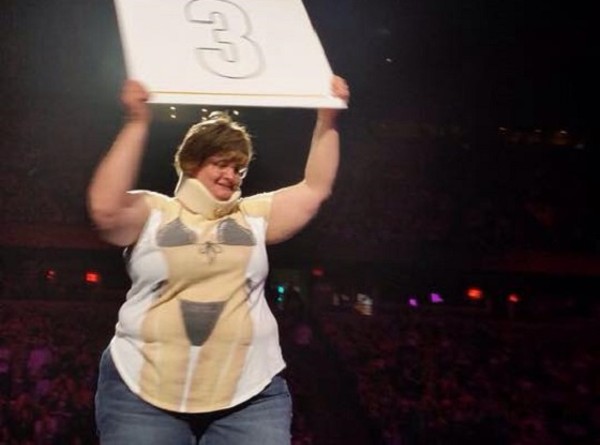 Thanks for not posting her naked!
L

so why not twelve? I think they could both last, unless its too close to bed time. I heard sposnors for Rob is dream n grow, muscle jellies and Halo 4 her. and JD is primos itailian subs, wawa and tasteycakes

Sent from my LG-H871 using Tapatalk
Click to expand...

Sent from my iPhone using Tapatalk

I have video of the fight. Dam custom that's a hell of a tan you got brother.

Watch "MMA Fighters Knockout each other at the Same time" on YouTube
https://youtu.be/ZFtHa4nj1SI

machinist9 said:
I have video of the fight. Dam custom that's a hell of a tan you got brother.

custom said:
The brazilian sun is strong 2 minutes in the sun and you turn into a jigaboo lol
Click to expand...

PPV or livestream here in the pit.

Location
In my wife's purse

Naked allllll dick and no nuts by the way

Mighty-Mouse said:
Naked allllll dick and no nuts by the way


Sent from my iPhone using Tapatalk
Click to expand...