ANABOLIC MATRIX
ON Sale Now +
Apply coupon code: mace20 for an additional 20% off​ 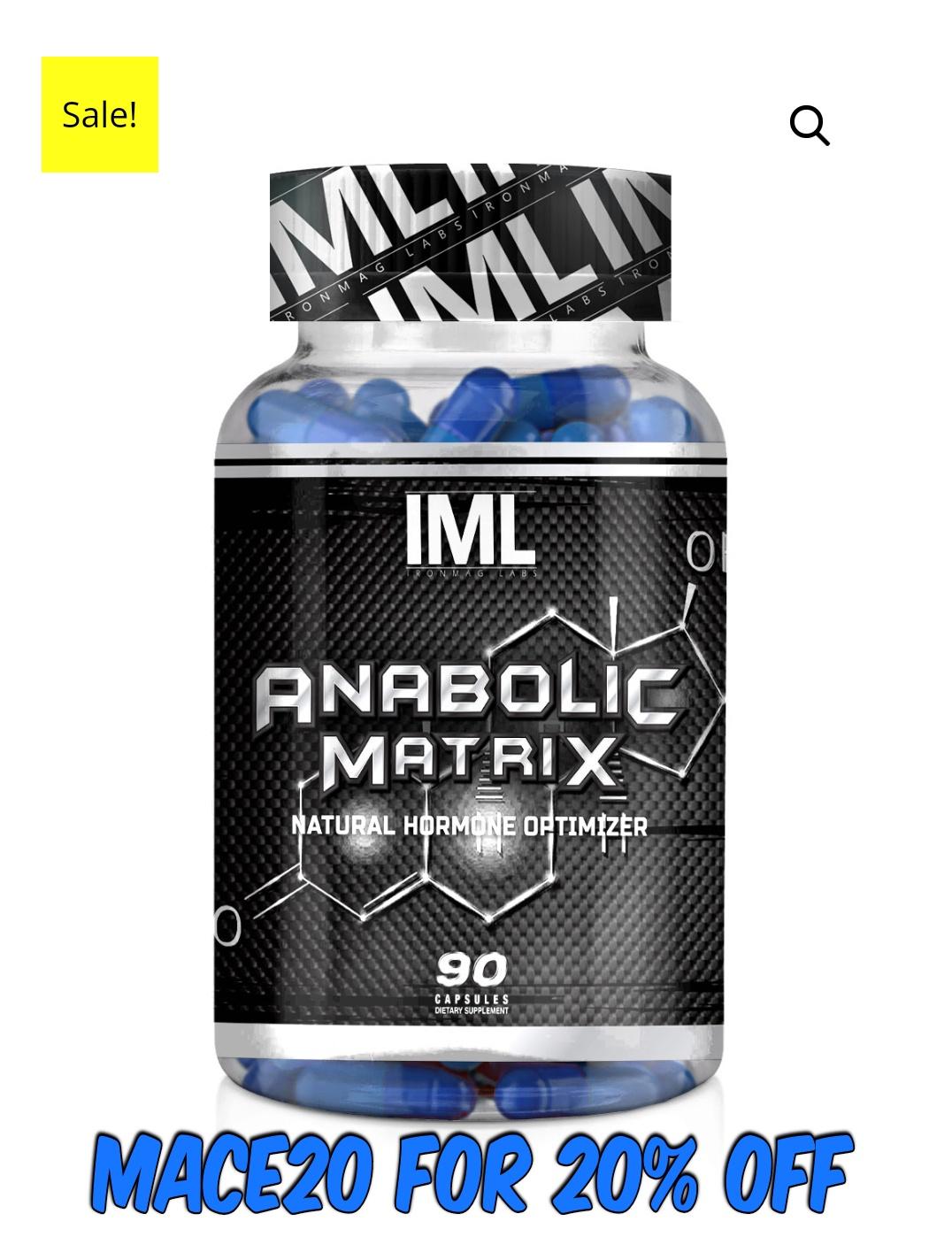 The Tribulus Terrestris in our formula contains a minimum of 20% Protodioscin, the active ingredient that raises LH (Leutenizing Hormone) levels. Most Tribulus based supplements on the market do not contain a high quality Tribulus extract and will do absolutely nothing!

How Does The Gonadal Axis Work?
The hypothalamus secretes GnRH in a pulsatile fashion. GnRH travels down to the anterior pituitary gland and binds to the pituitary gland’s receptors. LH (luteinizing hormone) and FSH (follicle-stimulating hormone) are released from the pituitary gland. Both these hormones enter the bloodstream and flow to the testes, where the LH stimulates the Leydig cells to produce testosterone, which acts on the Sertoli cells and stimulating sperm production.


LH binds the LH receptors and promotes the conversion of cholesterol to pregnenolone through protein kinase activity. Pregnenolone is a precursor of testosterone. Testosterone is also required for other important biological processes, like the development of primary and secondary sexual characteristics, increasing libido, and epiphyseal closure.


FSH stimulates the Sertoli cells to produce androgen binding globulin (ABG) and inhibin. ABG binds to testosterone from the Leydig cells and keeps it available in the seminiferous tubules and other target tissues. Inhibin has more of a negative feedback role; it helps regulate spermatogenesis and inhibit FSH, LH, and GnRH production.


Raised testosterone levels in the blood stimulate the release of inhibin, which causes negative feedback on the pituitary and hypothalamus, decreasing the production hormones in the pituitary gland. Inhibiting the aromatase enzyme increases FSH production, suggesting that FSH regulation depends more on estradiol than testosterone.


Apart from its claims for improvement of sexual functions in men, the puncturevine plant (Tribulus Terrestris: TT) has long been considered as an energizer and vitalizer in the indigenous system of medicine. Sexual behavior and intracavernous pressure (ICP) measurements were taken in rats to scientifically validate the claim of TT [containing protodioscin (PTN)] as an aphrodisiac.


Forty sexually mature male Sprague-Dawley rats were randomly divided into four groups of 10 each. Group I served as a control group and groups II, III, and IV were treated with three different doses of TT extract (2.5, 5 and 10 mg/kg body weight, respectively), orally, once daily for 8 weeks. Weight was recorded and the rats from all four groups were subjected to sexual behavior studies with primed females and various parameters namely mount and intromission frequencies (MF and IF, respectively), mount, intromission and ejaculation latencies (ML, IL, and EL, respectively) as well as postejaculatory interval (PEI) were recorded. In addition, blood pressure and ICP were recorded for all rats at the end of study.


The weight gain and improvement in sexual behavior parameters observed in rats could be secondary to the androgen increasing property of TT (PTN) that was observed in our earlier study on primates. The increase in ICP which confirms the proerectile aphrodisiac property of TT could possibly be the result of an increase in androgen and subsequent release of nitric oxide from the nerve endings innervating the corpus cavernosum.


Tribulus terrestris (TT) has long been used in the traditional Chinese and Indian systems of medicine for the treatment of various ailments and is popularly claimed to improve sexual functions in man. Sexual behavior and intracavernous pressure (ICP) were studied in both normal and castrated rats to further understand the role of TT containing protodioscin (PTN) as an aphrodisiac. Adult Sprague-Dawley rats were divided into five groups of 8 each that included distilled water treated (normal and castrated), testosterone treated (normal and castrated, 10 mg/kg body weight, subcutaneously, bi-weekly) and TT treated (castrated, 5 mg/kg body weight, orally once daily). Decreases in body weight, prostate weight and ICP were observed among the castrated groups of rats compared to the intact group. There was an overall reduction in the sexual behavior parameters in the castrated groups of rats as reflected by decrease in mount and intromission frequencies (MF and IF) and increase in mount, intromission, ejaculation latencies (ML, IL, EL) as well as post-ejaculatory interval (PEI). Compared to the castrated control, treatment of castrated rats (with either testosterone or TT extract) showed increase in prostate weight and ICP that were statistically significant. There was also a mild to moderate improvement of the sexual behaviour parameters as evidenced by increase in MF and IF; decrease in ML, IL and PEI. These results were statistically significant. It is concluded that TT extract appears to possess aphrodisiac activity probably due to androgen increasing property of TT (observed in our earlier study on primates).


The effects of Eurycoma longifolia Jack were studied on the libido of sexually experienced male rats after dosing them with 200, 400 and 800 mg/kg body weight twice daily of different fractions of E. longifolia Jack for 10 days. Results showed that E. longifolia Jack produced a dose-dependent increase in mounting frequency of the treated animals with 400 mg/kg of chloroform, methanol, water and butanol fractions resulting in mounting frequencies of 5.3 +/- 1.2, 4.9 +/- 0.7, 4.8 +/- 0.7 and 5.2 +/- 0.1, and 800 mg/kg further increased them to 5.4 +/- 0.8, 5.4 +/- 0.8, 5.2 +/- 0.6 and 5.3 +/- 0.2 respectively but there were no erections, intromissions, ejaculations or seminal emissions during the 20-min observation period which allowed for the measurement of sexual arousal reflected by mounting frequency uninfluenced by other behavioral components. This study provides evidence that E. longifolia Jack is a potent stimulator of sexual arousal in sexually vigorous male rats in the absence of feedback from genital sensation.


Previous studies from this laboratory have suggested that 2-hydroxyestrone is protective against breast cancer, whereas the other principal metabolite, 16 alpha-hydroxyestrone, and the lesser metabolite quantitatively, 4-hydroxyestrone, are potent carcinogens. Attempts to directly decrease the formation of the 16-hydroxylated metabolite were either unsuccessful or required such high levels of the therapeutic agent as to be impractical. On the other hand the concentration of the protective metabolite, 2-hydroxyestrone, proved to be readily modulated by a variety of agents, both in the direction of increased protection and the opposite direction, increased risk by a variety of agents and activities. We have focused our attention on indole-3-carbinol, a compound found in cruciferous vegetables, and its further metabolites in the body, diindolylmethane (DIM) and indolylcarbazole (ICZ), because of its relative safety and multifaceted activities. It has been shown that it induces CyP4501A1, increasing 2-hydroxylation of estrogens, leading to the protective 2-OHE1, and also decreases CyP1B1 sharply, inhibiting 4-hydroxylation of estradiol, thereby decreasing the formation of the carcinogenic 4-OHE1. In addition to these indirect effects as a result of altered estrogen metabolism, indole-3-carbinol has been shown to have direct effects on apoptosis and cyclin D, resulting in blockage of the cell cycle. In addition to its antitumor activity in animals, it has also been shown to be effective against HPV-mediated tumors in human patients. All of these responses make the study of its behavior as a therapeutic agent of considerable interest.


Science Behind Maca Root
Scientist Gustavo Gonzalez of Peru’s Cayetano Heredia University, who led what the scientists say is the world’s first study into maca’s effect on humans, told a news conference the three-month trial involving 12 volunteer men pointed to an 180-200 percent lift in libido and up to a doubling of sperm production.


“It’s a miracle (product),” said Dr. Fernando Cabieses, a professor and authority on maca. The plant, he said, was a nutritional gem for people of all ages.


The studies were preliminary and not subject to independent review and confirmation, factors which may influence the degree to which the research is accepted by other scientists. But experts said the data so far was promising.